I should probably preface this story with I swore I would never get induced, so at 41 weeks I continued to drink my raspberry leaf tea and started looking into acupuncture.  After a second session of acupuncture, I lost my mucous plug  but was still feeling the pressure to get induced from the hospital staff during a routine stress test even though everything checked out okay.  I chose instead to take some more herbal tinctures recommended by my midwife, but after breaking out into a rash two days shy of  42 weeks I had a moment of weakness and agreed to be scheduled for a round of Cervidil* as long as I could go home afterwards, in order to have my planned home birth.

In retrospect I wish I had not had the induction, as I feel in my heart he would have been born a few days later.  After a second round of Cervidil,  my sister and I headed back to my home where by this point  my contractions were getting more intense.  My sister who had been timing my contractions was now on the phone with the midwife who suggested I get into the shower to determine if the contractions were actually getting serious.  Once in the shower, the contractions were indeed getting stronger and closer together.  By this point I wanted to get out of the shower.  I was supposed to stay in the shower for twenty minutes but my sister “tricked me” by saying I had only five more minutes to go, when I actually had ten.  I moaned that she had tricked me, then suddenly I needed to throw up! With the water still running, I jumped out of the shower and threw up my entire breakfast into the toilet.  My sister laid a towel over my back and called the midwives to come; I knew I had transitioned.

I put my blue dress back on and walked around the house between contractions, every time a contraction mounted I found myself squatting and pulling on whatever I could find whether it was the edge of the couch or the kitchen towel rack. I was also very verbal, I must have loudly proclaimed “this hurts” what felt like a hundred times over; said more like a release than a complaint. When the midwife arrived, she checked me to make sure I was fully dilated before removing the Cervidil which by that point I was begging for her to take out.  My body was already starting to bear down, a force of its own, so intense that I felt as if my body would rip apart.  I knew it would not, and I continued to trust the process as I mentally held onto the proverbial speeding train that was my labour.

By this time, my two friends who were acting as my doulas had also arrived, the second midwife was still on her way.  As my midwife set up her “work station,” she suggested I labour in the tub and asked my sister to pour water over my belly, (hydro therapy had been on my birth plan as a way to cope with contractions) but I disliked this very much.  It seems that most women find water relaxing during labour but not me.  All I wanted to do was squat and pull down as hard as I could, so out of the water I came.

Next, I found myself kneeling and squatting on my bed without my blue dress on as I was starting to sweat.  At this point my body gave me a break and the contractions became more manageable.  I moaned and swayed my hips between each wave.  Then I started pushing, actually engaging my core, I only pushed when it felt necessary and just listened to my body.  At one point the midwife asked if I wanted to feel my baby’s head, but I said “no, I can’t” because I thought if I touched his head, all my progress would go backwards, I needed to concentrate.  The only thing my midwife told me to do was to use my voice to help push, other than that she let me be.  I could hear when people talked but was too focused on what I was doing to say anything.  I think I remember someone asking “what is that?”  and hearing the midwife explain that my water had not yet broken, that the bag of water was emerging first like a balloon with the baby still inside of it. Later the midwife told me this was called being born in the caul and was considered lucky.

I was starting to get tired of the position I had been in, so one of my friends helped support me by allowing me to hold on to her while I squatted and pushed. Soon I felt the ring of fire but it was not as intense as I thought it would be; it made me think of an elastic band being pulled very tightly, when I pushed out his head the sensation did surprise me however. Next, I think I may have pushed once more and his body came out, with the midwife quickly catching  him and asking me to sit up as I was still on my hands and knees. She placed my baby on my chest (he had a very long cord) while exclaiming “here is your baby!”

I could not believe I was finally holding my baby, and as he lay on my chest I remember thinking “so this is what you look like.”  Welcome to the world little M!

**Here is a wonderful image of a baby who was born in the caul. 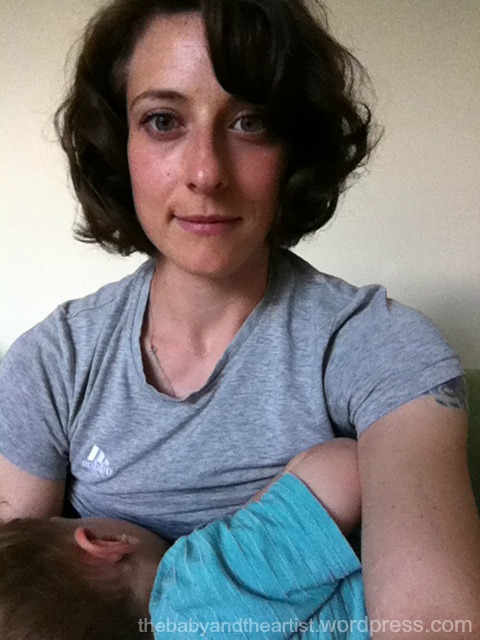