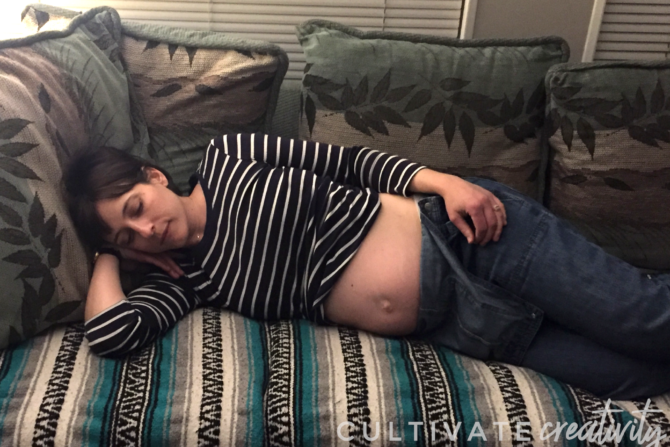 How much to share and where to begin? The Covid-19 pandemic added a whole other layer to the end of my pregnancy, but not to the birth. We had planned for a home birth in the first place, therefore the birth itself was not affected by the pandemic. In Canada, midwifery care is part of our healthcare system and having a home birth is one of the birthing options. This was my second planned home birth (you can read about my eldest son’s birth here).

I am having a hard time getting my head into the idea of birthing again, ever so slowly I can feel myself shifting back into this state of being, but it is taking time.

My husband and I conceived baby Z last summer while in Japan during my husband’s HLTA (Canadian Armed Forces acronym for: Home Leave Travel Assistance). During the first five months of my pregnancy, my husband was still deployed overseas. In September of 2019, I started full time graduate studies at a seminary in Toronto. Between that and parenting, I had little time to think about my pregnancy. The pregnancy in a lot of ways did not feel real. Roughly around the time that I was beginning to show and halfway through my second academic semester, around week 32, I finally began to enjoy my pregnancy. I told myself once the school semester was over that I would jump headfirst into nesting and preparing for the new baby. Then the coronavirus was updated to a pandemic. Suddenly, all the preparatory steps of pampering I had been looking forward to, were gone. No pre-baby haircut, pedicure, or bikini sugaring were to happen. Instead I found myself awkwardly shaving in the shower and trying to style my hair as best I could. Not how I envisioned things.

Despite forgoing the pre-birth ritual self care, other aspects of the birth plan remained in place. As part of the birth preparation, we hired a birth doula as I felt that having extra support would be beneficial not only for me, but also for my husband. We were able to have our initial meeting in person, however the meeting before the birth was via Zoom. There were so many unknowns in the initial stages of the pandemic that at first we wondered if we would be able to have our doula present. Luckily, we were able to.

One of my worries during my pregnancy was how this birth would compare to my first birthing experience. I was truly empowered by my first birth and did not want that to change. Would this birth also leave me elated? As well, mothers who have had two or more children always speak about how different each labour/birth is. I wondered if that would be the case for me? I knew I could not control how my birth unfolded. Instead, I found some birth affirmations which resonated with me, then read them every couple of days. I worked on letting go of expectations and trusting the process that would be this birth.

There was one thing however that I wanted to change about my first labour: being induced. I wanted to experience going into spontaneous labour. The week leading up to my estimate date, I had some intermittent prodromal labour, but it always subsided. Then, the day after my estimate date, I was scheduled for my 40 week midwife appointment. I awoke that morning with faint prodromal labour. I spent much of the morning alone in our room, sitting on the birthing ball, rocking myself back and forth and breathing in the aroma of diffused clary sage. I was also emotional and I did not want to go to my appointment. I called my midwife to tell her that. Instead, the on-call midwife came over to our house to see how I was doing. It turned out I was 2 1/2 centimeters dilated. She did a quick membrane sweep and I was officially 3 centimeters dilated. She recommended that I take Gravol and try getting some sleep if I could. She also said that she would most likely be seeing me that evening. As afternoon turned into evening, my contractions began to intensify.

Between bites of the supper meal, I knew that things were starting to pick up. We were fortunate to have a friend take our son overnight. This involved my husband driving 45 minutes one-way to drop him off. On his way out the door, he made a call to the doula to come to the house. The doula arrived shortly after he left. At that point I was pacing around. My husband returned home to find me more relaxed, but the contractions were all over the place. Some quite long and others quite short. After a couple of hours, the primary midwife arrived and began setting up. Prior to the arrival of the midwife, our doula would massage my back and hips between contractions. This was one of the methods that I chose to help with pain management during labour. The massage was so relaxing that I wondered if my labour was slowing down. It was not.

I continued to labour peacefully in the bedroom with my husband and doula by my side. Classical music played softly in the background. The midwife quietly setting up, holding space, observing, and offering affirming words. There were moments of unintentional humour like the doula practically begging me to “take a sip of coconut water.” Or prior to the baby crowning, I suddenly remarked that I was “hungry.” The midwife asked that my husband fetch me a Popsicle from downstairs. My husband held the popsicle for me so that I could take bites of it between contractions. There were also really sacred moments. One in which I went inward, I visualized a large dark circle that was illuminated with stars. Each time I had a contraction, I would visualize this until finally it became too intense. I stopped visualizing this in order for my body to move at slower pace. My memory is blurring together but this is shortly before I transitioned and felt the urge to push.

I noticed many similarities between both births. The positions I laboured in (walking, being on my hands and knees, etc.), to throwing up prior to transition, to our baby being born in the caul, just like his older brother! These were all things I had experienced with my first time giving birth. The [active] labour for this birth was 4 hours long, whereas my first birth was much shorter at 2.5 hours. The slower pace of this labour allowed for humour and classical music, which I liked. I think at the end of the day, birthing a baby is a mindset. Yes, both my labours had some differences but also many similarities.

There is so much more to this birth story, many details which I have left out for the sake of brevity and privacy too. The second midwife arrived shortly after I started pushing. When the midwife laid baby Z on my chest, my husband later told me “it is the happiest he has ever seen me.” Despite the pandemic, I went on to have another beautiful and empowering birth.

My hope is that all who give birth can have the experience of birthing in a safe space, where they are respected and that informed choice is truly a part of their experience. I have added a copy of my birth plan as source of encouragement or inspiration for whomever may need it on their birth journey.

Copy of my Birth Plan:

The Baby is Born/Third stage: